Chef, Kuldeep Raj, accessed his local Healthier You: NHS Diabetes Prevention programme after a blood test showed he had a high risk of getting Type 2 diabetes. Kuldeep learned that there are lots of small changes you can make to prevent diabetes from developing, as he lost 13kg and his blood sugar levels returned to safe levels. 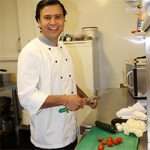 With a new-born daughter and two businesses to run, Chef Kuldeep Raj rarely stopped but when he started to feel unwell, he went to his GP to get a health check.

A blood test showed he had a high risk of getting Type 2 diabetes so he was referred to his local Healthier You: NHS Diabetes Prevention programme.  After just three months he had lost 13kg and his blood sugar levels had returned to safe levels.

The 39 year-old father said: “It was a shock to get the diagnosis but I wanted to make changes right away. Especially because my mum has diabetes and there’s a predisposition in the family.

As a chef I know how to make tasty meals but I can’t say I was educated on the effects each food group has on the body. The educator, Jo didn’t suggest crash dieting; instead, she proposed we start slowly to let healthier eating become a normal part of life.