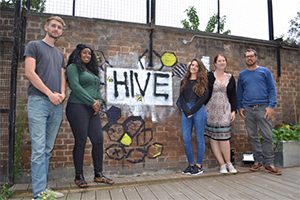 The Hive is a free health and wellbeing service which also offers employment, training and personal development support as well as social activities. The hub is part of the Minding the Gap service developed by the local council, NHS, partner organisations and young people in North London to improve the mental health and wellbeing of young people aged from 16-25, particularly those who are making the transition from children and young people’s mental health services to adult services.

“The help I’ve received from Minding the Gap and my psychiatrist has been invaluable. Without them, my mental health state during this period would have led me back into crisis. To me, that is incredibly valuable.”
Callum, 19 years old, from London

In March 2017, Callum was put in touch with The Hive in Camden, a social hub offering young people one-to-one help and advice on their health and wellbeing, substance misuse, and employment, training and personal development.

Callum was experiencing high emotional distress and needed help with his mental health, chronic physical health issues as well as other difficulties affecting his wellbeing.

He moved to London from Devon with his family three years before and lived with his mum, younger brother and stepdad. There was social services involvement with the family due to a serious incident of domestic violence and relationships remained challenging.

Callum was receiving support from multiple agencies. Communications between them had sometimes been difficult and became especially confused when he experienced a mental health crisis over Christmas and New Year 2017/18. Through the network approach of Minding the Gap, however, The Hive brought all the professionals together to consider what Callum needed. This group continued to meet monthly, with significant improvements in understanding between the psychotherapist, the psychiatrist, the GP, and family therapist.

Anticipating Callum’s suicidal thoughts could worsen, the network was also in contact with the Camden Crisis Team.  When he did need support in April, they reacted quickly and he was able to stay at the Camden Crisis House.

The Hive network also presented his case at the Minding the Gap transition meeting, held fortnightly to provide specialist input for challenging cases. It led to a referral for Callum to the Complex Anxiety Depression and Trauma Team and a new care coordinator has joined the network to help with his transition.

Recently, The Hive has been investigating housing options with him as Callum now feels more confident to live independently. He has asked to have his benefits reassessed and has opened his own bank account.